So earlier this week Verybadcat tagged me for this Honest Scrap award and I promised I'd get to it soon so going to give this a try tonight.

The rules are I must share 10 things about myself and tag some bloggy friends to receive the award and play along, so here goes...
So I'm supposed to tag a few people, so I'm tagging Jen and Shieldmaiden98 and anyone else that would like to play along.
Posted by Tricia at 10:52 PM No comments:

Arrogance is NOT Acceptable from ANYONE!

Today my husband had an appointment with his neurologist. This was not his normal appointment - his doctor's office called him and said that due to the cases of PML having been found more frequently he wants to see all his patients once a month before they get infused. Biogen-Idec is still recommending every 6 months with the neurologist so this is not coming down from the drug manufacturer or the FDA. It is his preference. So we went today to see him and discuss.

Seeing him once a month is a hardship for us, we don't live nearby, also with hubby not working it is a financial hardship to have to pay $25 copay once a month instead of 2x a year. We said as much, the doctor ignored and pushed on. Well if he has to go once a month he may as well have his infusion there too because then he could do it all at once. SURE the light dawns a little more - if the infusion is done there, they can bill it. $$$$ seem to be part of the rationale at least to me. I don't suggest this to the doctor.

Hubby has been having bad headaches since being diagnosed 12 years ago. Every neuro he has seen has said this is normal (including this one in prior visits) and has prescribed neurontin to help alleviate these. But today he told us that MS does NOT cause headaches and that he suggests my husband make an appointment for the headache center that they conveniently run in their office. Of course this can't be done at the same time as a Tysabri infusion because they alternate days using the same space AND it would incurr another $25 copay of course.

Hubby has had good luck with neurontin helping with the headaches and was asking the doctor to give it to him and he basically refused. (FINE - I'm sure his primary care physician would give it if we asked) Hubby was tight lipped but again said that coming out there to see the doctor 1X a month AND another visit for the headache center would be a hardship.

Here is what the doctor said and I am quoting - "It's your MS buddy! If you can convince it to stop being active because the drive is too much of an inconvenience more power to you."

My jaw dropped. Hubby's jaw clenched. We walked out, we made the appointment he required at the end of Feb for another follow up and left. I had to go back to work so I told hubby we would talk tonight. But he called me when he got home and I just went off on how sarcastic and rude the doctor was and how I figured that the only way I would consider staying is if the doctor realized he was an ass and called TODAY to apologize.

My carpooling friend's wife has MS too, she see's a different neurology group, she is also on Tysabri and gets her infusion where my husband does. Her doctor is not recommending monthly visits and so I am going to get the info for her doctor and schedule a consultation to consider changing.

His neurologist is a specialist, he's well known, he's published, no doubt the man knows his stuff. But today he was arrogant and overbearing and I find that uncalled for and unacceptable. I will find my husband a new doctor that can do all he can with a better attitude and then I will let him know why he's losing a patient.

When will people learn not to cross me? GRRRR
Posted by Tricia at 12:48 PM 7 comments:

I am absolutely LIVID

In 2008 I made improvments to my home. I installed a new high efficiency gas furnace. I put an additional layer of energy saving insulation in my attic. I replaced drafty doors with new energy star rated doors.

I knew that the tax deduction for this ended in 2007 BUT was assured that it would be extended by several people who seemed to be in the know.

They were wrong! Here is what the energystar.gov site says:

"On October 3, 2008, President Bush signed into law the “Emergency Economic Stabilization Act of 2008.” This bill extended tax credits for energy efficient home improvements (windows, doors, roofs, insulation, HVAC, and non-solar water heaters). Tax credits for these residential products, which had expired at the end of 2007, will now be available for improvements made during 2009. However, improvements made during 2008 are not eligible for a tax credit."

My response to this is YOU HAVE GOT TO BE FUCKING KIDDING? I'm just wondering why I have a black cloud over me these days - can nothing go right? Last year I spent $10,000 improving my home and NONE of it is tax deductible -so sorry for your shitty luck.
Posted by Tricia at 1:26 PM 2 comments: 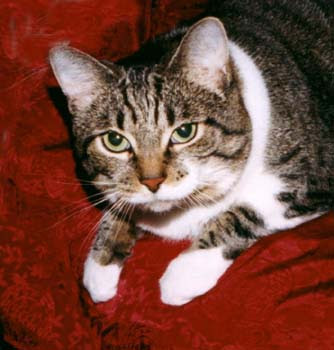 Anni died today, she has been my sweet friend and confidant since October 1995 when I plucked her out of a cardboard box full of "free kittens" in front of Kroger in Loveland, Ohio.

She had lost some weight lately but we attributed that to a change in diet when we went to an all canned food diet for our diabetic kitty - Mike. Anni preferred her crunchies and she was not thrilled with the food change. She was still spunky and had some cattitude but she had become a little more clingy the last week.

Today something happened. She started to cry around noon as if she had a hairball to pass but she didn't puke. She went back to sleep on top of the heating grate behind the loveseat and I thought nothing of it. But then she stood up and peed on the floor - she NEVER did this -she was fastidious and I knew something was wrong. I went and got a laundry basket and made her a nest and then I called the vet and left a message on th emergency voice mail. She tried to jump out of the basket and fell and just laid there and cried.

When the vet called back we were on our way - going to meet him at the office. As I feared there was nothing to be done - he said it felt as if her abdomen was filled with fluid - likely blood from a ruptured tumor. The only humane thing was to end her suffering and my husband and I both cried as we said goodbye. I held her as she took her last few breaths.

Focusing on the Positives...

I guess that is enough for one day - wouldn't want to overwhelm you all with my cheeriness! ;-)
Posted by Tricia at 11:23 AM 8 comments:

I'm hoping that 2009 might be a good year for us - better than 2008 turned out. I guess I'm still an optimist at heart. Optimistic that this might be the year it all turns around.

I won't say things can't get worse - cause we know what happens when someone gets brave enough to utter that phrase. I sure hope the worst is past though.