Who would have thought that finally in my forties I'd start to feel comfortable in my own skin?  That I'd lose some inhibition and go for things I want?  Well I never would have predicted it but so far in 2014 I have sang and danced in the musical Aida with a great cast.  Me?  Dancing? On a STAGE? in front of an AUDIENCE?  Well it happened for real!  This is me, in the center right under the guy standing up on a platform in the back. 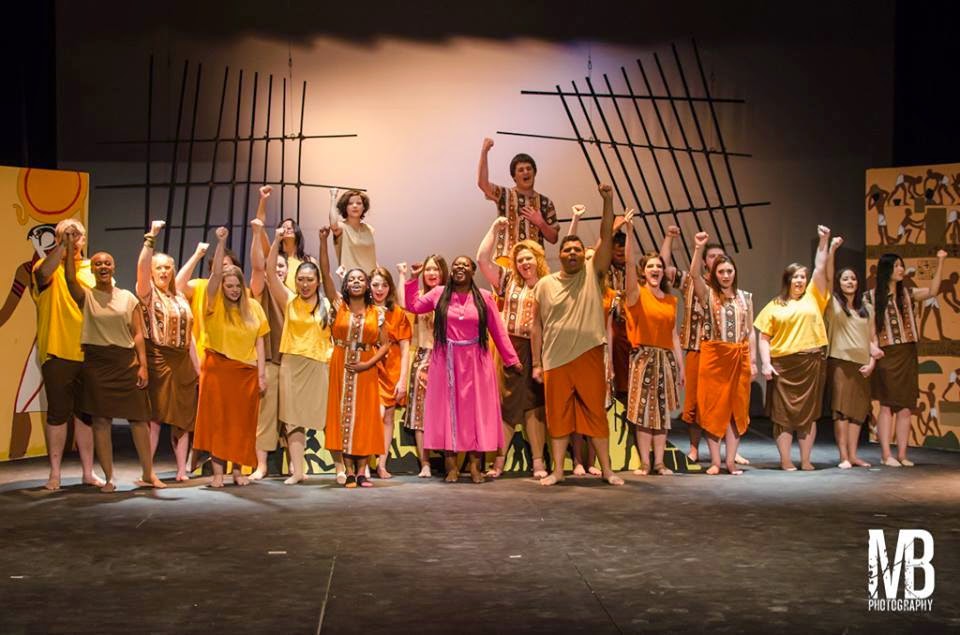 And I have worked on 3 short films so far in 2014, as an actor in one of them and Producer on all of them.  One more to go and I will be acting and producing in that one as well.  I have an IMDB page - for real!  :)  My IMDB page is HERE!

And yesterday I actually auditioned for a lead part in a musical.  I was nervous and felt a bit silly trying out (many, many child parts and I was the only adult who auditioned yesterday more tonight).  BUT I nailed it, I really did.  My singing was right on the money and I read for the part I wanted and did very, very well I believe.  So now I am hoping no one better shows up for tonight's auditions.  I want this part, yes I really, really do.

So yes the things that most people are doing in their 20's finding themselves and expressing themselves and being all artistic, well I'm doing it now.  In my 20's I was too busy working 3 jobs trying to make ends meet to be artistic.

Don't worry if I get the part you will know for sure as I will shout it from the mountaintops to anyone who will listen.  :)
Posted by Tricia at 10:55 AM No comments:

Labels: crazy, dreams, it's all about me, just plain fun, life

Running away from it all...

So my new blog is up and running and really starting to take shape - very focused on MS and living with a spouse with MS at least for now.  But I still have this blog and I don't really want to walk away from 6 years and hundreds of posts.

Middle age has not been so kind, let me tell you menopause is a cruel, cruel joke that mother nature plays on us women.  I used to long for it to be over - menopause meant the stopping of the monthly torture right?  Well yes eventually I suppose it does but first it means months and years of irritability, hot flashes, having to pee 5 times a night, never getting a good nights sleep, did I say irritability?

Yes thank you so much mother nature for cursing us women all the way around.

I do want to run away from it all some days - but lately my dreams of running away involve an RV and some luxury along the way.  Maybe I'll start a road trip one of these days and meet some of my internet friends along the way.
Posted by Tricia at 7:15 PM No comments:

Over the years I have used this blog for many things, talking about MS, talking about marriage, talking about turning 38, 39, 40.... I have whined, laughed, bitched, complained and more.  I am not abandoning completely but I feel I've lost my passion for this site.

I have started a new blog - will be much more focused and as such is titled after one of my most read blog posts here entitled Married to the MonSter.  It will be all about marriage to someone with MS and the many meanings that can have.

I have not really fleshed it all out but please feel free to follow me there, especially if my MS posts were the ones that interested you.

My new URL is www.marriedtothemonster.com I hope some of you will join me there.

Thank you!
Tricia
Posted by Tricia at 12:34 AM No comments:

The Life I Love?  Would not include dementia and giving up on any hope of a career.

Love What You Do?  Well I guess I can be proud of what I do - take care of my husband, advocate for his needs, make sure that he gets everything he needs and deserves.  But do I love it?  I can think of things I'd love more than being yelled at and taken for granted.  Many, many things.

Live the Life you Love - Love the Life You Live - well if you can do that I guess go for it.

Posted by Tricia at 9:27 PM No comments:

Going back to my roots - or going full circle?

Things have gotten to the point that I just feel trapped.  I feel betrayed, lonely and trapped. I'm not sure how to address this and I keep wanting to go back to my roots, back to the days when I went to church regularly, when I prayed prayers that were not just pleading for mercy, when I felt part of a community, and felt love from a group.  When I believed that God loved me and had a plan for my life. I sure can't think this was the plan and I'm sure that somewhere along the line I deviated from the plan and got sent off into this alternate reality.  I don't know I've gone round and round with this, fate versus destiny versus luck (or lack of luck) and I keep wanting to go back to the place that made me the girl I was 20+ years ago before I took this crazy path.

I guess I'm looking for someone to help me make the best of my current situation, to support me in the life I have now and to give me some hope.

So next Sunday I'll be setting foot in church, specifically the church I used to be a member of, where I taught Sunday School and directed the choir and sang solos on Sunday morning.  The church I left in 1995 when I chose that horrible guy that led me astray over the life I thought I was meant to live at the time.  Many additional choices past that one lead me to where I am today and yet I feel going back to this place, and these people may be the place to start healing some of this pain.

I know it won't change my situation - a husband with dementia who takes his frustration at the world out on me - but perhaps it can change the only thing that I control - my reaction to his abuse, my heart.

Labels: coping, depression, dreams, it's all about me, marriage, multiple sclerosis, religion

I'm tired all the time, no motivation, no energy, no excitement.  Hard to get myself out of bed and dressed and actually doing anything most days.  I get up when I have to, I go places when I have to, I eat when I'm hungry.

I have spurts of excitement here and there, a movie wrap party a few days of filming on some new material, some time with the kids.

But it comes back to  being tired, sick of cold and winter, hibernating, sleeping all day.

Something has to break soon.  Hopefully not my last thread of sanity.
Posted by Tricia at 10:15 PM No comments:

Something happened while at the super bowl party at my work tonight.  I'm not sure what.  My husband was hanging out with some people who were customers, and they seemed to be getting on famously.  They chatted for hours and then he said something that offended them.  I don't know what it was.  But they left, they had planned to stay through the game but they left around the end of the 3rd quarter and went home.  The husband came back to get a pizza they had ordered to go and I tried to apologize (even though I did not know what was said) and I tried to explain that my husband has dementia and is mentally ill.  This man was like a stone, he told me I just want my pizza and he walked out.

I went in the bathroom and cried.  And I cried on the way home (we had driven separately so husband does not know I cried).  And I'm crying now.

I don't know why this situation has me so upset, but it does.  I don't like that he hurt strangers with his words, and I don't like that they were angry with me too by association.  And I feel like maybe I'm going to have to start keeping him away from the public or expect to do a whole lot more apologizing.
Posted by Tricia at 11:19 PM No comments: