My first Celebrating Home Party is a Success...

I had my first party today - there were 7 guests and out of this I got 4 parties booked and enough in sales to get me started out in this new venture. I expect out of the 4 parties booked I will come up with another 2 parties from each of those so I'm off and running!

And it was a great fun afternoon with friends, food, and lots of laughter.
Posted by Tricia at 5:23 PM No comments:

My Grammy was the Best!

She's been gone since the summer of 1993 - a very long 16 years but I was telling my friend VBC a story about her and her dogs today and it made me think of her. So I wanted to share a little bit about my feisty Irish grandma!

I called her Grammy - there were 19 of us grandchildren and we all called her that. She and my Grampy lived in a single wide trailer in a local trailer park when I was a kid - they sold their house to my mom and dad in 1969 and moved to the trailer park for their retirement years.

My grandmother continued to work for another decade or so as the cafeteria lady at the local hospital. Everyone there knew and loved her. Her name was Beulah but everyone called her Boots. I don't know the story behind the nickname Boots and always wished I did. One of my shocks as a kid was finding a picture of my Grammy in her 20's with a baby on her hip and a cig dangling from her lips! LOL

Grammy had a string of little black chihuahua's one right after the other and they all had the same name - Bimbo! I was probably 13 before I knew that was a humorous name for a dog and what it really meant. Those little dogs hated kids - so it's a good thing there were 19 of us! LOL

Grammy was a great baker - she had so many great recipes for cookies and cakes and treats. We would go visit her once a week on either Friday or Saturday night and she usually had fresh baked goodies. But sometimes she'd pull out a package of Archway cookies and tell us "Grampy baked this week" because she didn't have time and he ran up to the grocery store for cookies for the Sat night visits.

When my family was in a crisis and I wasn't sure my parents would survive together I was afraid a lot. I had a recurring dream that I was being chased by a huge angry gorilla and it was trying to hit me with a cast iron griddle. I know this doesn't sound super scary but when you're only 8 or 9 it's traumatic (enough that I remember it 30 years later?) and in my dream I was always trying to get to Grammy's house, I knew if I could just get there she'd save me. She was my happy place in those dark days. Thankfully my parens survived and even thrived but that's another story for another day.

While I was in college I brought a group of friends home one weekend and we were all gathered around watching Dirty Dancing and my Grammy stopped by for a visit and she watched with us girls. Now her kids were teens in the 50's and 60's so she wasn't exactly in tune but my friends all loved her for trying when she announced "That Patrick Swazye is DREAMY!" LOL

I think I was still in college when she brought a cake to my mom and dad's for dinner one night and pronounced it "Better than Sex" Chocolate Cake and then muttered under her breath "it wouldn't take much..." and I nearly choked on the laughs I couldn't stop from coming. Sad though that apparently for her sex could be replaced with a chocolate cake even if it wasn't the best ever.

And while she was in the hospital in her final days and getting more and more morphine for the pain, a bunch of my cousins and I all showed up to visit her on a rainy summer afternoon. We had all been there off and on for days visiting whenever we could, but this day we were all together and my sweet Grammy said "it must be cold out today, all you girls are wearing shirts!" We all laughed and took turns hugging her and Grammy and her girls shared a last good laugh. She died later that week and left a hole in all our lives that can never really be filled.
Posted by Tricia at 2:43 PM 5 comments:

The shelter screwed up! The day the call came in that Maggie was being turned in there was a man there specifically looking for a black lab puppy and they told him he could have first dibs at her. They told him to call back on Tuesday and come in on Wednesday after she had her rabies shot.

He didn't call on Tuesday - WE DID and they told us they had some interest but the guy hadn't called so we could have her.

Then he showed up on Wed to see her as they said (not sure why he didn't call?) and was quite upset that they had promised her to us when he says they promised her to them.

The manager of the shelter had a death in her family and was out of town so all these promises were made by various volunteers who had no authority to make them.

Anyway when the manager got back and sorted things out - the bottom line is the other guy was promised first, all his references checked out (as did ours) and she felt compelled to give the dog to him.

So as a big "sorry for the mix-up" they offered us a free adoption on a dog of our choice now or in the future. Will keep us on a list if we want for a lab or lab mix young dog or we can adopt one that is there now.

We had talked about adopting "Belle" if Maggie fell through but were so hoping for Maggie.

This is Belle - I'd have to go meet her to decide: 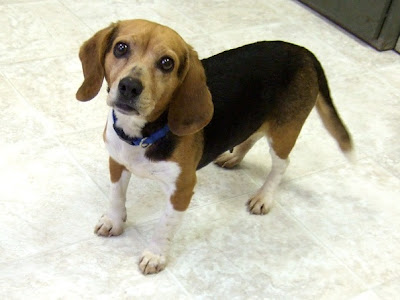 Once again dear friends I am walking in the Albany MS Walk on May 3rd! Last year I set my initial fundraising goal at $300 and managed to raise over $1100 which was AWESOME.

This year my fundraising goal is $1200 and I started a team hoping to gather more walkers.

If anyone is interested in seeing my personal page please email me at tricia.mswalk (at) gmail (dot) com and I will send you the link to my personal/team page.

Anyone local who would like to walk - the more the merrier!
Posted by Tricia at 4:08 PM No comments: 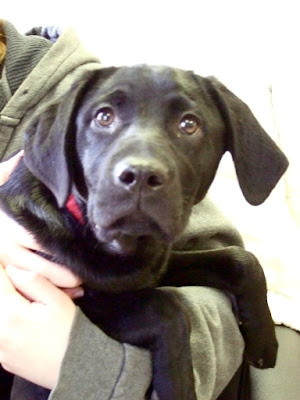 Maggie is a 4 month old Black Lab pup that was turned in to our local shelter on Saturday. We fell in love with the face (how could you not?) and she will be coming to live with us next week about 2 days after she gets spayed. NY State law states that a dog over the age of 4 months must be spayed or neutered before leaving the shelter. She's a little young - our vet won't do it until 6 months BUT it will be better for our financial situation to have her spayed before we get her as our vet charges about $200 for the procedure and the shelter includes it with the $90 adoption fee. All good!

So here is another sweet picture of my newest love: 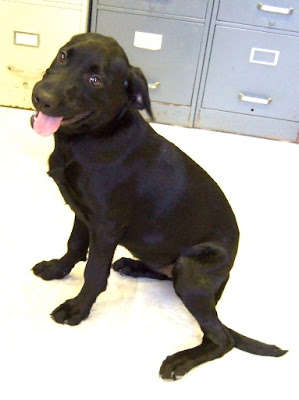 Not because anyone hurt my feelings or pissed me off but because I witnessed my husband realize another thing that MS has taken from him and the resulting cloud of disappointment.

We went to an open application and test call for the 2010 Census today at 1pm - the jobs are 20-40 hours a week for approx 10 weeks at a time and pay up to $18 an hour so it seemed like a good idea to apply. I went to thinking during the summer months when the sun stays out until 9pm I could work part time to help shore up our finances and that Pete could do it full time and earn some income.

We filled out the application and waited to start the test. Once given the okay we had 30 minutes to complete 28 questions. I dug in and got to town, the test was pretty simple, can you follow directions? can you comprehend what you read? can you do simple math? can you read a map? I finished it with time to spare and turned my test in and then had to wait for the 30 minutes to be up. This is when I looked over at my husband and realized he was struggling. With 5 minutes to go he had not yet finished his test and was looking really confused.

Then she said time was up, he had answered maybe 15 of the 28 questions and out of those he only got 9 right. He was angry at first but then the realization sunk in that he had failed miserably at what would have been a very simple test for him a few years ago. He looked over at me and I had tears in my eyes and he asked what was wrong. I told him later as I didn't want to discuss it while still in the testing area.

We went outside and I told him I was not mad - he thought I was mad at him for not doing better. I said I'm just sad because I know that 5 years ago you'd have finished faster and gotten a better score than I did. Then I let it go but we went to McDonald's for a fast lunch and he was pretty despondent, and I couldn't help it I full out cried with tears running down my face for him and what this damned disease has taken from him. He was trying to comfort me which seems really backward.

Just another sign that we need to start the wheels in motion for SS Disability I fear.

The good news is that I only got two questions wrong scoring a 93% and will likely get hired - so this summer for a few weeks at least I can put in about 20 hours a week and try to keep our family finances above water.
Posted by Tricia at 4:52 PM 2 comments: