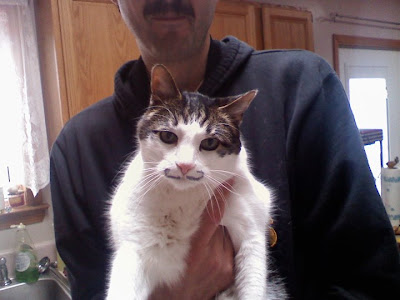 This is Felix - thankfully he is a sweet, cuddly and forgiving cat. We were bored on Monday and I found a Sharpie. Nuff said.

Mustache is already gone today, he furiously washed his face all night I think? :)
Posted by Tricia at 1:24 PM 2 comments:

I've really been neglecting my blog

I must admit internet I have a new addiction. Something that takes me out of the world I live in for a few hours at a time and immerses me in a whole different world. A world where I get to be totally badass and blast the living daylights out of things that get in my way. I tell you it is super satisfying to just take down the monsters one by one. I wish it was that easy in real life to just eliminate the monsters.

My new addiction? World of Warcraft

I know, who would have ever thought it? I certainly never had any interest in role player games before. The idea of sitting at a computer for hours playing a game where I shoot things and kill then certainly never appealed before.

I started playing for my husband. He started playing and wanted me to play with him. So I took the 10 day free trial offer and at first I really wasn't that into it. Then I played some more, and some more. Now I am more into than he is. I am higher level than he is. My character can kick his character's ass! WOOT - but mostly I play with him and help him with his tasks.

Totally not my thing, I've never been a gamer, but I guess I am now?

The downside to all this - the only reason I am higher level and needing to help my husband in this game is because the MS has taken this away from him. He was the gamer, always playing things like Diablo or Half Life, etc. He was good at it. Not anymore. He can't follow the maps, he gets lost, he gets confused, he gets frustrated. He needs me to play with him. I enjoy playing on my own much more - with other friends and people who don't get lost, frustrated and aren't in the next room screaming at me to help them. I kinda wish he'd give up on it since it's so frustrating for him. But I don't think I can give up - not yet anyway.

So dear internet - this is where I have been. Running around disguised as a troll in a fantasy world for hours every day.
Posted by Tricia at 11:12 AM 5 comments: